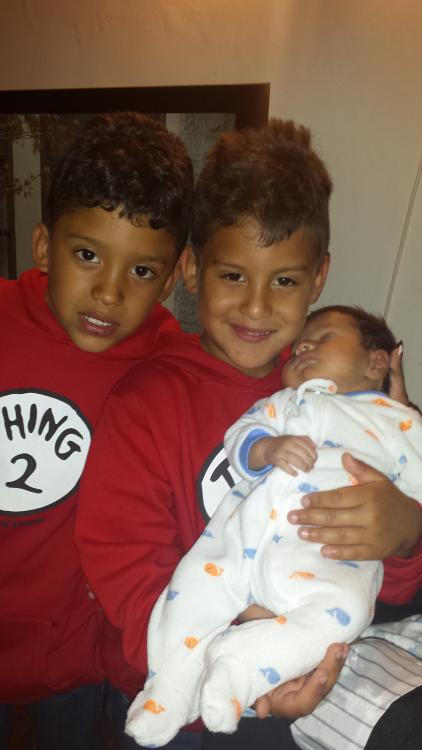 Zoila and her twin baby boys, Joel and Julian, shortly after birth.

In 2007, Zoila Pasos found a lump in her breast when she was just a few weeks pregnant. Not long into the pregnancy, she miscarried. While she allowed her body time to heal, she had the lump checked and was told it was a benign cyst and nothing to worry about.

Six months later, Zoila was expecting again. Around 12 weeks, she decided to move from Miami back to her native California. She noticed that the lump in her breast was growing, but chalked it up to the pregnancy hormones.

When she finally saw her obstetrician to begin prenatal visits, he scheduled an ultrasound for her baby, and for the lump. Zoila’s additional genetic screening also indicated a likelihood of downs syndrome, so she also needed amniocentesis. It was a busy week.

At the ultrasound the next day, Zoila discovered she was having twins! She was mostly shocked and excited, but still anxious about the amniocentesis. She wanted to make sure everything was okay with her two babies.

The day after her ultrasounds, she received a call from the doctor about the lump in her breast. A biopsy was the next step, and it she needed it right away.

“The whole time, I just assumed my [breast] implant was leaking fluid,” said Zoila. “I was so worried about the amniocentesis and the results of that test, I never once dreamed that the lump was cancer.”

On December 26, 2007, Zoila’s obstetrician called and referred her to an oncologist.  “What do you mean, an oncologist? Cancer?” Zoila was stunned.

When she saw the oncologist the next day, the news was grim. An abortion without delay was his recommendation. She had Stage 3C Invasive Ductal Carcinoma breast cancer. The lump was seven centimeters big and the cancer had spread to her lymph nodes. It was literally feeding off of the increased estrogen produced because of being pregnant.

When she questioned the oncologist about keeping the babies, he saw no alternative.

“He basically refused to treat me. If I didn’t have an abortion, he did not want to be liable,” explained Zoila. “He did not give me any hope.”

Reluctantly, she went to the abortion clinic orientation. At the initial appointment, she walked out.

“I was going to die either way. If I went through with it [abortion], I would’ve died of depression,” Zoila said.

That’s when she went home and started researching. She found Hope for Two and Dr. Elyce Cardonick (maternal-fetal medicine specialist). She heard the words, “no, don’t have an abortion” and it was just what she needed.

Dr. Cardonick was able to refer to a new oncologist at UCLA Medical Center who reassured her, she was going to be fine. Around that same time, Zoila received the great news from her amniocentesis test—her twin baby BOYS with perfect chromosomes!

Zoila received four rounds of chemotherapy during pregnancy. At 32 weeks—on April 4, 2008—she delivered Joel and Julian via planned cesarean. Two weeks later, her bundles of joy came home together.

Haydee with her husband and son, Emmanuelle.

In 2013, Hope for Two called Zoila. A new member from New Jersey who only spoke Spanish had a similar cancer diagnosis, and she needed a support woman who could speak her language.

“Haydee had the same cancer as me, with an almost identical story,” said Zoila. “The initial lump, and being told it was nothing to worry about. It was when Haydee got pregnant and the lump grew that more tests revealed she had Stage 2 Invasive Ductal Carcinoma breast cancer.

Zoila and Haydee spoke every day. At the time, Zoila’s oldest daughter, Tatiana, was attending St. John’s in New York City. When Zoila went to visit her daughter, she made special trips to see Haydee.

“It was a tough time for Haydee, but she made it through and gave birth to a healthy baby boy, Emmanuelle, on March 30, 2014.” Zoila said.

With Haydee in remission, the daily calls have stopped, but the two continue to talk weekly, and exchange text messages and photos regularly.

“My boys are healthy, energetic six-year-olds in the first grade. To think that they wouldn’t have been here, if I had listened to that first doctor, it’s just incredible,” said Zoila.

“I had a support woman and was in touch with Dr. Cardonick throughout my entire journey. Hope for Two, and how it started—with  the founders going through what we went through—was so inspiring, I decided I had to become a support woman,” she added.