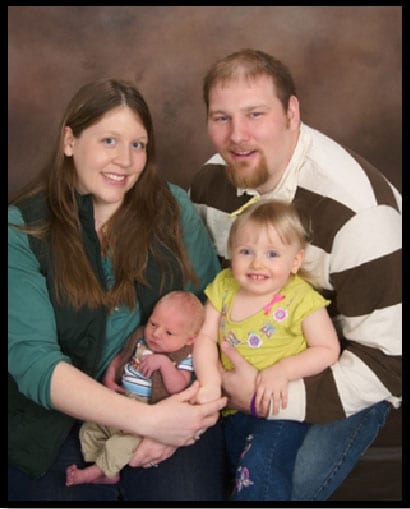 As a cancer survivor, I look back on this picture and think of how much my family has endured over the past year and how thankful I am that God has blessed my life with them and given me the chance to continue to be here with them.  My story starts on November 12, 2010 after being diagnosed with Hodgkin’s Lymphoma at age 28 when I was 32 weeks pregnant with my son, Jack.

My daughter, Madison was 18 months old at the time.  In the two weeks prior to my diagnosis, I had endured an ultrasound, two fine-needle aspiration biopsies, and surgery to remove two lymph nodes in my neck using local anesthetic only because I was pregnant.  Then, when I finally learned that I had Hodgkin’s Lymphoma, I couldn’t get staged because I was pregnant, however, after seeing an Oncologist, we were assured that Hodgkin’s Lymphoma was typically slow growing and that I had probably had it all year.  A few more months without treatment for baby Jack’s sake would be acceptable.  Finally after two grueling months of waiting, Jack was born without complications on January 4, 2011.  He was beautiful and incredibly healthy.  I was able to spend four days at home being the mom that I wanted to be and breastfeeding baby Jack.  Then on January 10th, Maddy had to learn the ropes of being a big sister without her mama as I was away having my PET scan, bone marrow biopsy, a minor surgery to place my port, and the first of twelve chemotherapy treatments for Stage II Hodgkin’s Lymphoma, which started on January 12, 2011.  Suddenly, my life had been displaced as I was a cancer patient attempting to defeat this horrible disease that was trying to take over my body, while on the side, take care of my newborn baby son and 20 month-old daughter.  I continue to mourn the loss of that “quiet time at home” when it’s just supposed to be you and your husband watching your children as they sleep, eat, and sleep some more.  As the treatments went by, Jack and Madison grew.  I had a follow-up PET scan in March of 2011, which showed that my cancer was in remission.  It was at that moment that I became a cancer survivor.  Granted, I still had four months of treatments left, but I was tired of living my life as a cancer patient.  I was determined to live my life how I wanted to, which meant displacing the cancer treatment as secondarily to me being a mom.  I struggled to do this physically as the treatments had begun to wear me down, however, emotionally I was doing everything I could to maintain my mom status.  I owe it to my children for being so patient with me as play times grew shorter in length.   Finally on June 15, 2011 I had received my last treatment and I learned on July 6, 2011 that the cancer was gone.  Since then, I’ve changed my attitude to reflect my renewed love of life.  I’m so thankful for everything and every day in my life, the good and the bad, as long as it means that I’m still here with my family.  I feel so blessed for all the support that I received as I went through treatment.   I don’t think I’d be where I am today without Hope for Two’s help.  They gave me so much support and hope when I found out about the cancer, during treatments, and now, as I’m in remission.  What a wonderful program to help women diagnosed with cancer while pregnant.  Thank you so much Hope for Two!!!