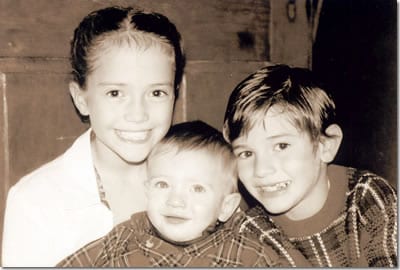 Life was grand before that day. I am a mother, a wife and work part-time as an academic counselor at a local university, and I enjoyed all aspects of these three hats. We were a family who was always going, going, going.  Enjoyably, I was always the one who made sure that things ran smoothly and that no one was ever stressed. I never got sick and was always there for everyone, but on April 26th,  the world stopped for me. They told me that the road was going to be long. Within a week I was in surgery; 5 weeks later I started chemotherapy; and 7 weeks later the toll of chemotherapy (and pregnancy) started kicking into full gear. I was having a hard time getting out of bed in the morning. Morning has always been my favorite time with my children. They had always gotten up in time to share the morning with their mother by having a nice breakfast as well as conversation before going off to school. This is where, with no complaint, my daughter stepped in. One morning (I just could not even open my eyes)  I heard her getting her younger brother (6 year old Jared) up for school, making sure he was dressed appropriately, making him breakfast and making sure they got out to school on time. On that day she changed the roles in the house and took over as the “mother”.

Summer vacation started about a week later. Samantha took the reins of the house and made sure her brother and I were well taken care of. I would hear the chatter of the children downstairs and hear Jared asking “Sam” can you make me a waffle? “Sam, can I turn the television on? Can I eat in the TV room? All the same questions he would fire away at me. Samantha would ask him “Did you feed Lucky (the dog) and Tangy (the cat)?” “Are you teeth brushed?” Around 11 a.m., she would quietly tiptoe into my room and ask me how I was doing. Did I need anything? She rubbed my belly and said “sweet nothings” to her brother to be. It would be about 2:30-3:00 in the afternoon before I actually managed to muster up enough energy to enter the world outside of my bedroom. I came down, and she updated me on their progress thus far in the day and what role I might be playing (as long as I was feeling up to it, she would say) for the remainder of the day. She got us through the summer, never complaining just accepting (but I do believe hoping) that  it would go back to the way it was BEFORE ever so soon.

Her new brother was born 5 weeks early, on the kids’ first day back to school for the 2004-05 year. He had to stay in the hospital for 16 days, and the children were not allowed to hold him as he was in the NICU. Because of the new baby and me having to start a new round of chemotherapy, another surgery and radiation, the dynamics of the household were about to change again. Over the next 4 months, our house would receive the help of grandmothers, aunts and friends who came to live with us and help out. Samantha let them know how we did things and where things were, but she was also subjected to different ways of upbringing and expectations from the new interim “mothers” of the house. I know that she probably bit her tongue at times, once again handling things without letting me know it was hard.  I knew it wasn’t always comfortable for them as Jared sought refuge with me in my bed
.
She also was subjected to many questions from her classmates, such as: “What happened to your mom’s hair? Is she going to die?”  Samantha attacked this subject very quickly by gathering up all the information about cancer we had used to educate ourselves and going in and doing a talk about it in school. She was able to educate her fellow classmates as well as talk about her feelings of what it was like to be a part of this undiscriminating disease.   She was also my fashion consultant. I did not feel comfortable  wearing a wig, so I wore bandanas.  Sam would make sure the bandana matched the outfit I was wearing for the day.

I had my last radiation treatment on February 1st, 2005, and I started feeling a bit like my old self about 3 weeks later. I said to Samantha, “I think that I am starting to come back to life again,” and she said very quietly “Good, because I like you as our mom.”