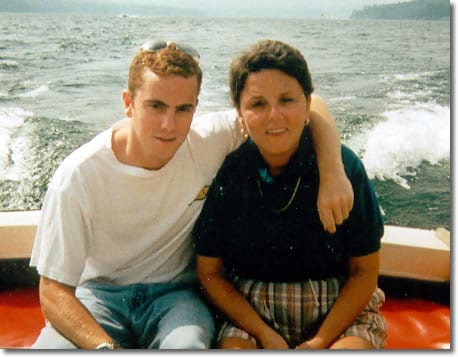 Today is my son’s birthday.  He is 26 years old, tall and handsome, has a wonderful personality and is a college graduate embarking on a whole new life and career.

Boy, have we ever come a long way.

In 1979, 20-plus weeks pregnant with my first baby, I was a happy wife with a great husband, a new home owner and embarking on a wonderful career of my own.  Life was busy and full.  Could it get any better?

Then, as we were doing yard work at our new home, I found that lump in my neck that changed just about everything.  After seeing several physicians, I was diagnosed with stage 2 Hodgkin’s Disease while pregnant, a lymphoma that had an extremely poor prognosis at that time.  A visit to an oncologist led to even more frightening news.  His exact words were, “You know you will have to end this pregnancy.” At best, that might give me 18 months to live. (Medical science did not yet have bone marrow transplants, advanced chemotherapeutics, stem cell, etc.)  The thought of aborting the pregnancy and then dying anyway was not a positive option.  Nor was the thought of having a baby and leaving him without a mother.   Geez, could this get any worse??

Those who know me will tell you that I could not accept what I was being told.  I asked the oncologist to check out if there was anyone, anywhere who could offer anything more.  This was before the days of the internet with instant answers.  He just looked sadly at me.  When I said, “What would you do if I were your 29 year-old pregnant sister?”  He sprung into action.

Two days later, I had input from the comprehensive cancer centers of Dana Farber in Boston, University of Pennsylvania in Philadelphia (my alma mater), and Memorial Sloan-Kettering in New York City.  There was one suggestion to try to take the pregnancy to 34 weeks and try treatment after that.  Again, medical science was not yet successful at bringing preemies successfully through early deliveries. One place said they could offer nothing if the pregnancy was not ended immediately.

However, there was a physician in New York who had two patients diagnosed with Hodgkin’s Disease within weeks after their deliveries.  They were alive, and their children were thriving.  Clearly, they had had this disease while pregnant, and their children had no ill-effects.

The rest is history.  I went to New York, met with this oncologist, and we all agreed to take this pregnancy as far as we could.  My husband and I made this decision, and our oncologist told us, “Don’t look back or second-guess yourselves.”  He was right.  That would have only made us crazy.  The plan included weekly check-ups; an agreement from my husband and me that we would consent to an early delivery if it seemed that the disease was progressing dangerously; maybe third trimester treatment.  Who knew?

So, of course, the baby decided to come late.  My oncologist was fearful of speeding up delivery unnecessarily and possibly jeopardizing the baby.  He was sure that if I did survive the Hodgkin’s Disease, I would never be able to get pregnant again. I continued to work full time throughout the pregnancy.  I saw the doctor every week.  I wallpapered our house.  I sewed curtains.  My husband built a cradle. Anything to take our minds off things.  I held my parents together who were beside themselves with worry.  I prayed with my husband.

James was born at 9 lbs. 5 ounces and was a beautiful, strong baby.  I began full mantel radiation therapy two weeks after delivery for 8 weeks straight, followed by nine months of chemotherapy.  “What are the long term effects of this treatment?” I asked.  My doctor told me,  “we really don’t know.  We don’t have any long term survivors yet.”

I did what I needed to in order to survive.  I did not have anyone to talk to, no one with whom to share my feelings and fears. People who said, “I know what it must be like” did not have a clue about that reality.

So, here we are.  Twenty-seven years after the initial diagnosis.  Hodgkin’s is now a more easily treated illness with a much better prognosis than years ago.  There are new treatment modalities, new chemotherapeutics, little or no radiation.  I have survived and I have thrived.  My first son and his brother, born almost three years after diagnosis, are grown and independent.  I have worked at a full-time career.  My husband has been with me through thick and thin.  I have had numerous consequences of this survival, including a breast cancer diagnosis 6 years ago and thyroid and vascular problems from radiation.

Would I do it all over again?  You bet I would.  I have not one regret.

I have volunteered for the American Cancer Society for over 25 years now, sometimes, talking to newly diagnosed patients; sometimes raising money and walking in relays. When I found “Pregnant with Cancer” one night on the American Cancer Society web site, I contacted them immediately.  Who better to support a woman who is pregnant with cancer than someone who has been there and done that?

To be a support person can be emotionally grueling.  It can reduce you to tears.  It can bring up long lost emotional pain.  It is also the most rewarding volunteer work I have ever done. It is hearing a woman shout to her family that, “This woman survived.  This woman had children,” and then hearing the patient and her family begin to cry. It is being part of a sisterhood or a club in which you did not ever want to be a member.  It is about life and giving life.  It is about fulfilling life.  It is hope.

When I was diagnosed with cancer 33 years ago this month, about 20
weeks pregnant…there was no Hope for Two, no Pregnant With Cancer.
It did not exist.
I kept my diagnosis quiet from friends and only immediate family and
medical providers knew about it.
At that time, a diagnosis of cancer could cost you a job.
If you moved from one employer to another, there was no guarantee at
all that your medical insurance coverage would follow you.
Through the change in laws over the years, we don’t need to keep the
diagnosis a secret and health insurance can be transportable if you
change jobs.

So, real progress has been made.

I am married to the same man for 35 years.  We have traveled all over
the world.
My son is now 32 years old.  Has 2 college degrees.  He has a 29 year
old brother.
I work full time and have done so for decades.  I am now a case
manager for patients with catastrophic and complex medical issues.
I have been diagnosed with 2 other primary cancers (12 and 4 years
ago)  but have had no recurrence of the first.  I live with the
consequences of survival of that first cancer.  I did what was
necessary to beat the other 2 cancers and what I need to do to keep
the first one at bay.
I volunteer with various organizations including Hope for Two and
American Cancer Society.
I don’t want to hear “I can’t” from anyone.

Best of all, I live