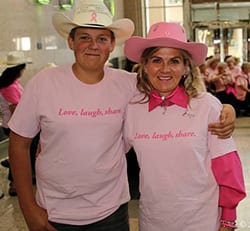 I found bilateral painful breast lumps at 7.5 weeks pregnant (April 17, 2000) and because I was pregnant, there seemed not to be any urgency to prove or disprove the cause for the lumps (the lump in my left breast disappeared with hot compresses in 5 days, but the right lump remained). A ‘non urgent’ ultrasound was booked some 5+ weeks later (May 31) and upon radiologist review and recommendation, I had a complete lumpectomy on June 2 under local anesthetic.

Once the pathology came back, my surgeon spoke with my family doctor, my OB/GYN as well as the surgical team at the Tom Baker Cancer Centre here in Calgary Alberta Canada and I had a right modified radical mastectomy with lymph node dissection on June 13, 2000–the day after I was given the diagnosis. The tumor was very aggressive. Within 24 hours I was taken into the hospital and booked for surgery through the emergency department. This was just a really bad dream. It had to be. What pregnant woman gets breast cancer??

After surgery, my surgeon assured me that no further treatment would be required. Once I was registered with the Alberta Cancer Board and was seen by a medical oncologist however, my whole life changed, AGAIN! I was told that I needed chemotherapy. In light of our fertility issues and the fact that the Tom Baker had not ever treated a pregnant woman, I was adamant about keeping the pregnancy, but needed to know Alexander would be OK if I consented to have the chemo. When I refused to have chemo until I could talk to someone who had done it, my medical oncologist was furious. I finally told him “Don’t call me, I’ll call you. If you can’t put me in touch with anyone who’s had chemo in pregnancy, then it will just have to wait till after the baby is born.”

That night, my husband, Mark, found ‘Pregnant with Cancer’ on the internet. Within 24 hours, I received 4 emails, a phone call and pictures from women all over North America who had done it before me. They told me the babies were fine, and I could see that by the pictures! The next day I called the oncologist and told him I was ready! He couldn’t believe my change of heart, and when he asked why I told him that the ‘Pregnant with Cancer Network’ gave me the strength and reassurance to do whatever I felt was necessary to save myself and give hope that my son would keep his Mom.

I began chemotherapy August 4, 2000 and had my last treatment on October 4, 2000. When I was having chemo, my OB/GYN told me to prepare myself, that Alexander would be early and low birth weight. So, in fine form, 7 days late at 7 pounds 7 ounces with a full head of thick blonde hair (and I had none!) came my beautiful, loving message from God; a message telling me he was just fine, in fact he was better than fine! He was the miracle we had hoped for…the miracle that may not have turned out the way it did but for strangers sharing their cancer journeys and their loving hearts with me….I’m so incredibly grateful! Thank you ‘Hope for Two…The Pregnant With Cancer Network’! What a difference you made in our lives!

I have participated in a retrospective study out of Philadelphia for women and their children who underwent chemo in pregnancy/in utero. Dr. Elyce Cardonick’s Cancer and Pregnancy Registry has been instrumental in providing valuable information to me as well as being a wealth of knowledge for me. I have contacted Dr. Cardonick regarding various matters through the years since having been registered, and her willingness to help, to provide advice and her expertise has meant more to me than I can put into words. Since Alexander’s birth, Dr. Cardonick has followed and tested my son-–in collaboration with my family doctor, Dr. Cardonick obtains annual medical information, which is added to her ongoing clinical assessments on these children who had chemo in utero. From physical to emotional and cognitive testing, these children are monitored. In fact, when Alexander was 2 and a half, it was Dr. Cardonick who I referred to regarding the safety of me having another child.

In April of 2004 I had twin boys! And it was Dr. Cardonick who assured me that although I had survived an aggressive breast cancer, there was no evidence to suggest that it would affect my pregnancy or my ability to carry another baby. Interestingly, Dr. Cardonick continues to collect not only Alexander’s annual medical documentation, but that of his twin brothers Thomas and Matthew as well. She told me that her interest also involves the ability of the women in her focus group and their ability to go on to have other children after cancer diagnosis and treatment.

I have been given so many incredible gifts in my life–not the least of which has been a second chance at living the most amazing life filled with laughter, love, and boys. Three beautiful, healthy children; children who fill our lives with wonder and joy. I thank God every day for those women from the ‘Pregnant With Cancer Network’ who threw us a lifeline and pulled us to safety. Because of the gifts I received from virtual strangers, I do the same whenever I can. Since 2001, our family has participated in the Annual Canadian Breast Cancer Foundation CIBC Run for the Cure and have had a hand in raising almost $200,000 for the Foundation. Every year Alexander and I participate in the Survivors’ Parade, a celebration of the lives of breast cancer survivors–a parade that Alexander chooses to do with me knowing that more likely than not, he will be the only male participating in the event; knowing that his presence sends a very strong message that no one is exempt from breast cancer. When I asked him the night before the parade if he wanted to go again this year, he looked at me with his big beautiful matter-of-fact eyes and said, ‘Mom, we got through breast cancer together, we’ll do the Survivors’ Parade together–Good night mom, love you!’

Very shortly after I went through my surgeries, cancer treatments, and began the sometimes daunting task of learning to live life after breast cancer, I chose to be ‘one of those women’ throwing out the lifeline known as ‘Hope For Two’. This has really solidified for me how important it is to reach out to others who are newly diagnosed, young, and just beginning their lives. It drove home for me how much of a difference it makes in their lives. In 2006, I went to work as a registered nurse at the Tom Baker Cancer Centre where I was treated. Every day I give myself, my experience, and the hope that I received in 2000, to others fighting a battle I so wish didn’t need to be fought.

Some days I think about how different things might have been had we not been able to connect with other women; pioneers in a new, scary, and uncertain world of cancer. Did I mention how very grateful I am for being the recipient of the gift of life and also the gift of security in numbers from a sisterhood of unknown faces who absolutely knows my heart? Well, I truly am. I am different now; better, stronger, kinder and always looking for an opportunity to pay it forward. All because a couple of incredible women joined together.