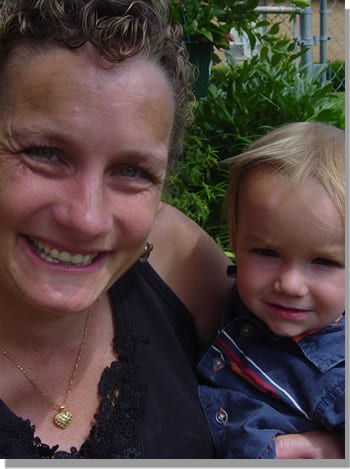 First, I should spill what I have come to call my “Gasp Factor:” I am the mother of 13 children, all by birth, all singletons, and all by the same husband.  I have 9 daughters and 4 sons, ranging in age from 19 down. Once you’ve retrieved your jaw from the floor, let me tell you my story.

Conventional wisdom would hold that a woman who’s spent virtually her entire adult life pregnant and/or nursing a baby should be virtually immune from breast cancer.  The physicians who treat breast cancer will tell you otherwise, that breast cancer knows no boundaries.

When I found a lump in January 2005, at age 38, it was all but taken for granted that it was just another cyst or fibrous mass.  Nevertheless, my obgyn ordered an ultrasound, and although that appeared normal, a core biopsy.  I lost my mother to breast cancer when she was 43, and my doctor wasn’t willing to take any chances. For that, I probably owe him my life.

After the hospital called with the news, a wonderful breast surgeon scheduled me on her day off.  I had expected merely to have her look me over and order a surgical biopsy; I only brought my husband along as an afterthought.  The doctor spent over an hour with us, diagnosing me with stage 2 invasive ductal carcinoma, ordering more testing, and then telling us the strategy that we would pursue.  She’d done the research ahead of time; she’d had another pregnant patient just months before.  Six months pregnant, I would be given several chemo treatments, deliver the baby, and continue with more chemo, surgery and radiation.

The good news was that the prognosis was excellent, for both me and the baby.  The bad news was that I would require a mastectomy, this would be our last little one, and I would not be able to nurse.  As someone whose religious convictions forbade birth control and who looked forward to having more children, this was hard news.  I teared up on the ride home; my husband gently reminded me that 13 healthy children is a lot to be grateful for, and I reminded myself that I had always wanted it to end this way – not with a gradual waning of fertility accompanied by false hopes, but with a definite “enjoy this baby, go ahead and get rid of the stuff that is outgrown, and look forward to the next phase of life.”

Barely two weeks after diagnosis, I received the first chemo treatment.  Apart from a sleepy day or two, and the inevitable loss of my hair, I weathered the drugs – Adriamycin and Cytoxan – extremely well.  Together, my oncologist, obgyn, and surgeon decided that my labor would be induced a week and a half early (I typically go overdue), and on May 3, 2005, I gave birth to a handsome, dark-haired 8 lb. 7 oz son named Kendrick.  While I was in the hospital, I had more scans, and two weeks later, I was back in the oncologist’s chair receiving taxotere, a more aggressive drug that had me feeling pretty miserable for a few days at a time.  With my eldest daughter’s graduation around the corner and our second born headed for a year overseas on an exchange scholarship, I was nevertheless still able to take care of all the preparations.

By June, it appeared the tumor was not shrinking as hoped, and so surgery was scheduled for later in the month.  I had a left modified radical mastectomy and oophorectomy.  My lymph nodes were found to have only faint traces of cancer, and the cancerous area of the tumor was smaller than feared, leading to the welcome news that I would not have to have radiation.  My recovery went swiftly; two daughters left for college and Germany; and Kendrick grew and grew.

In September I completed my treatment.  I was unprepared for how abruptly it was over.  Suddenly, all the people who had become part of my life over six month’s time were finished with me.  I actually miss the hours spent at the doctor’s office and miss my fellow patients there.  My hair is growing back, and chemo-brain is the only problem that persists after my adventure.  I was even surprised to find that I’d apparently gone through menopause, free of symptoms for the most part, during my pregnancy.  When quizzed about my chance of recurrence, the doctors peg it at 5% – far less than the chance that any woman will contract breast cancer in her lifetime.

In February 2006, I traveled to New Orleans for state-of-the-art DIEP flap reconstruction, which, unlike the TRAM flap, leaves the abdominal muscles intact.  The surgery is exacting and long, but after 3 days, I was hiking throughout the hurricane-ravaged city and feeling unbelievably terrific, despite having close to 40 inches of stitches.  I’m scheduled to return for revisions later this spring and am looking forward to my new, improved body, the conclusion to the past year’s adventure, and the next phase of my life.

I can’t help but remember the high point of that surgical consultation a year ago when I was told that my 13-pregnancy “pooch” could be used to replace my lost breast.  At the time, it was a reminder that cancer is not entirely a bad thing, and today, I can affirm that fact.

For instance, cancer has revealed just how many people love me.  People I barely knew brought meals; friends of friends sent cards; and total strangers walked up to me, shook my hand and asked how I was doing, calling me by name.  Busy with the demands of my large family, I never really noticed them before.

Cancer introduced me to a wonderful corner of the world: the compassion of my caregivers, the courage of fellow patients worse-off than I am, the incredible advances made by those that fight the disease.  These are things that amaze me.

Cancer gave me a clearer view of life.  I am not immortal, and there is more to life than just getting dinner on the table in time to get everyone out the door to the next event.  I want to remember that in every insignificant moment, there is something of the eternal, and to use each moment in the best way possible, to enjoy it to the utmost – even when it’s spent wiping noses.

Cancer allotted me much for which to be grateful- not just love, medical care, and survival, but also the ability to laugh at baldness and to get through the shower in five minutes, freed for a time from shampooing and shaving.

Cancer taught me that I am very small, yet very significant.  I have seen God’s loving hand in a myriad of things – tiny things like the beautiful painting of my favorite flower in the pre-op room at the hospital, and larger things like my children’s healthy, hearty laughter.  I am one patient among millions, one mother among billions, and yet God and man alike have taken the time to do special things for me and help me out.

Cancer is a gift.  It gives us the chance to view the world through new eyes, to approach life with renewed appreciation, to re-appraise the things we consider important.  It refines our faith and allows us to glimpse eternity.  Even when it claims someone we love, cancer gives us the chance to make amends, to show our love and to say goodbye.  To those of us who survive, cancer gives us a second chance, a fresh start, and a deeper understanding of the meaning of life itself.

All told, it has been one of the best years of my life.  In trials, we learn to rest on God’s strength and grace, and in that is joy.  And joy, even when it comes through trial, is a gift anyone can appreciate.