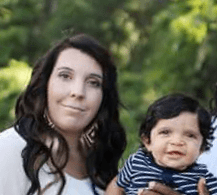 How my story begins: I was a happy mom of two boys, a happy wife to my husband of five years. I was in the process of going back to work as a paraprofessional after being a stay at home mom/mobile makeup artist. I enjoyed my small hometown, the beach, parks, and time with my family. I was team mom, a volunteer at the school. But I had not been getting my yearly screenings or tests. In fact, it had been seven years. I was also excited about the news that we were expecting another baby.

I was excited and eager to go to the obstetrician to make sure everything was going great. About a week before my appointment, I started having some bleeding and could feel that something was out of place. My mind went straight to what I thought would be the worst case – that I was miscarrying. I called my obstetrician and got in early and he reassured me that the baby was great! I just seemed to have a polyp on my cervix and it was large and causing the bleeding. He then said it was as simple as removing it in office and I’d be on my way.

But I was not on my way. It bled excessively upon removal and I had to be admitted and get stitches, all at my very first obstetrical appointment. It was very traumatic and scary but I was glad to be released the next day and home to relax. Things were well other than the usual morning sickness and such. My son sprained his leg and needed crutches, so I called to cancel my obstetrical follow-up appointment. I was told I really could not miss it and the doctor really needed me to come in. I instantly felt anxious. Nonetheless, I called my husband and he met me there so he could sit with my two boys during the visit. I was told the nurses would stay with my boys in the waiting room and my husband should come in with me. I declined (I’m super overprotective) and once again they said it would be best. So I obliged.

My doctor tells me that they sent the “polyp” off to be biopsied and it came back as highly invasive squamous carcinoma. He was showing me the lab results and pictures on paper and pointing them all out on the chart in the room. I just sat there sobbing a bit before asking for clarification that he is in fact telling me I have cervical cancer. “Yes, yes you do. I will be referring you to an obstetrical oncologist right away.” He also told me I needed to come to terms with the idea that termination may have to be considered. I quickly gathered myself (the best I could) and put on the brave mom face for my boys and left the office. I decided before he even finished his sentence in that office I could not terminate. I believe that if God brings you to it, He will see you through it. I then was referred to the obstetrical oncologist, who after reviewing my results and exam, said it was caught in the early stage of 1A-1B.

How I felt after diagnosis: I felt isolated, although I did most of the isolating. I kind of retreated to my bed and wasn’t social at all. Because of my diagnosis, I wasn’t able to be excited about being pregnant. Instead, I was constantly worried. I didn’t feel able to share our pregnancy with anyone except very close family and a select few friends. I also felt fear. I let all the possibilities run wild in my mind and I thought about the worst case scenario, and about my kids and husband. I found research online and come to find out it’s incredibly rare to have this type of cancer while pregnant. So there isn’t a whole lot of research and treatment plans to choose from, which made me doubtful.

Telling my family and friends: I was with my husband when told my results, and I waited for it to process for a few days before then telling my mom, sister, brother, and my husband’s parents. I hadn’t told others about the pregnancy either, so I didn’t share my cancer diagnosis socially. I finally told extended family and friends and social media when I became five to six months pregnant and started to show. I told them all in one big blog post to Facebook. I know that’s a big bomb… I also requested limited contact. I didn’t want all the questions and sympathy calls, etc. I struggled with “help” and receiving “support.” I still have not shared my cancer diagnosis with my boys, whom are only seven and nine. They are young and, in my opinion, don’t need the worry and burden of it.

Elizabeth with her husband and children

My treatment: I was scheduled for a LEEP/cone biopsy* to remove the remaining cancer from my cervix as soon as I entered my second trimester. I was able to stay awake during the procedure, which they normally do not allow (I didn’t want to be put under while pregnant, although I wouldn’t recommend it now, LOL). I was shown my baby before and after the surgery to ensure he was still just as great as before. And he was! After, I was then told there wasn’t anything further I could do like scans, surgery, chemotherapy, or radiation, until after the baby was born and that due to hormones it could spread if they missed any and be prepared for treatments after. At 37 weeks and what seemed like million complications later, my son Oliver was born in January of 2016. He was a healthy weight and length and the only issue was he was born with not enough brown fat so he stayed in the neonatal intensive care unit for a bit. But we did it! We both made it to that first goal I set for us!

After the birth, I was told I needed to have a hysterectomy to prevent recurrence and to be sure we removed all the remaining polyps and cancer cells. In April 2016, I had the surgery, which turned out to be good for me. They found different levels of CIN** in my uterus after the biopsy. At my eight week follow-up with my obstetrician (he performed the surgery), I was told that I was cancer-free and just needed to follow up every six months.

*LEEP: Short for loop electrosurgical excision procedure; removes abnormal tissue by cutting it away using a thin wire loop that carries an electrical current. Cone biopsy: An extensive form of a cervical biopsy; removes abnormal tissue that is high in the cervical canal. It is called a cone biopsy because a cone-shaped wedge of tissue is removed from the cervix and examined under a microscope.

**CIN: Cervical intraepithelial neoplasia, also known as cervical dysplasia and cervical interstitial neoplasia, is the potentially premalignant transformation and abnormal growth (dysplasia) of squamous cells on the surface of the cervix.

How I felt after treatment: I felt relieved that the cancer was gone, I knew I didn’t want more kids after my third, but the option not being there whether I wanted it or not still wore on me a bit. I felt like I had been not feeling well for so long. I really thought that this would be my light at the end of the tunnel so I could go back to my happy, normal life. But cancer took more than my cervix, uterus and fallopian tubes. It took the ability to live without an underlying fear of it returning.

What was most difficult for me: The most difficult part for me was the thought of anyone losing anyone. I didn’t want to lose my baby, or my boys to lose their mom, or my husband to lose his wife. I also struggled with the physical impact it had on me. I felt like I lost a year with my boys that I will never get back. I wasn’t able to attend all their games and take them fun places all summer like usual. The guilt that they, too, were suffering from my disease was horrible. Also, my husband and intimacy issues stuck around because of all the physical recovery.
I also feel it took a toll on everyone that is close to me – my mom, sister and brother, too. We lost our dad to cancer very fast after diagnosis and we are still grieving his loss, so it was hard to tell them. I definitely tried to keep it to myself a lot more to keep from burdening others.

What I did to help myself: I turned that frown upside down! I just had to think of it in a more positive way. I am alive, I have all my boys and we are all for the most part pretty healthy. Cancer gave me a new outlook – it allowed me to see how precious each day really is. I turned to faith and trusted in God’s plan for me. I looked at what I could do instead of dwelling on what I couldn’t and I set small goals for myself.

Where I am today: I am in a good place. I can talk about it now. I don’t get emotional about it as much as I used to because I have accepted its role in my life. I am a proud mother of three boys and happy wife of five years. I am an advocate and I am a Cervivor!

What I want other women to know: I want you to know how important it is to go for your yearly exam and screenings, and to ask for HPV testing. I want you to educate yourself on your own body. Listen to your body – don’t ignore symptoms. There is no shame in taking care of yourself. Also, help prevent your children from having to encounter HPV and cancer by getting your daughters and sons vaccinated. Ask questions.

Elizabeth found Hope for Two after being diagnosed with cervical cancer in pregnancy and delivering her son Oliver. She has recently become a certified volunteer support woman for our network in order to offer hope and support to others facing a similar experience.