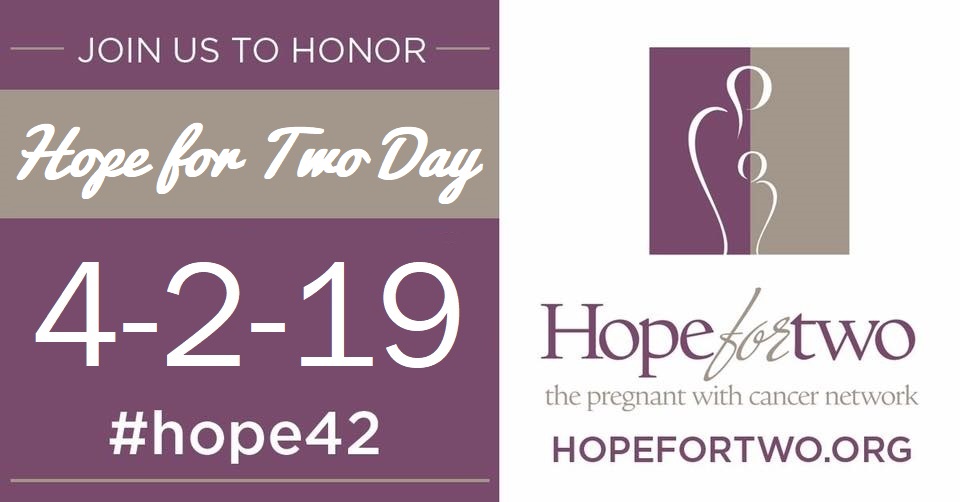 Tuesday, April 2nd, is the fourth annual “Hope 42 Day”!!! Help us celebrate by supporting Hope for Two’s network connecting women who are currently pregnant with cancer with other women who have experienced a similar cancer diagnosis.  Since 1997, we have provided information, hope, and support to more than 2,000 women from all 50 U.S. States and the District of Columbia as well as over 51 different countries.

Hope for Two operates through donations and the work of our volunteer support women.  Your “Hope 42 Day” donation funds our website and provides care packages for each Hope for Two patient.  But, most importantly, your donation guarantees that we reach and support even more women who are diagnosed with cancer while pregnant.

Please help make this year’s “Hope 42 Day” the most successful to date!!!  Click here to support Hope for Two: https://www.facebook.com/donate/514751592263100/.  Your donation today will help us continue providing women diagnosed with cancer while pregnant with information, support and hope. 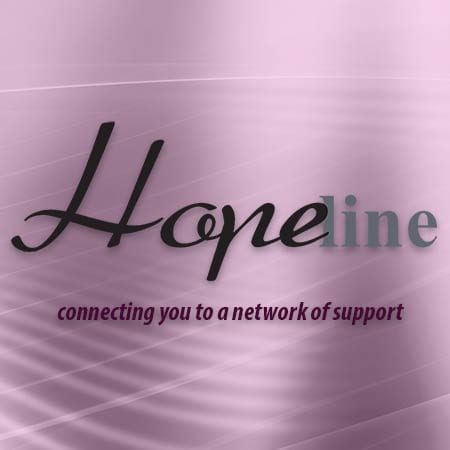 Attached is an inspiring and informative video about a young woman, Gina Lawson, who has experienced a cancer diagnosis in pregnancy.

You are your best Quarterback

By: Patty Murray, Chairwoman and Co-founder of Hope for Two…The Pregnant with Cancer Network

I learned this valuable lesson 21 years ago, just after finishing six months of intensive chemotherapy treatments, while at my radiation Oncologist’s office being fitted for my foam radiation cradle. It all began when I asked, what I perceived to be, a very straightforward question, “Where are we going to radiate, doctor?” With a puzzled look on his face, he paused, backed up and blurted, “That is a very good question. I really don’t know.” My husband and I were stunned.

It was my understanding, up to this time, that the medical community had treatment protocols for every ailment and disease. When they were confronted with a particular malady, they would apply the protocol and a certain percentage of success would be achieved. What I slowly learned during my eleven months of treatments is that there isn’t a consensus of opinion among health professionals as to how to treat any particular medical condition.

The reason I had asked the question in the first place was that there were varying opinions as to whether my excised tumor in the axilla (arm pit area) and the affected lymph node was a secondary tumor and that the primary tumor was still in my breast, which couldn’t be found during pregnancy due to a number of factors. After delivering my son, I had a breast MRI and they were convinced that the primary would be found in my breast. However, it wasn’t found because either the chemotherapy eliminated it or the primary was in the axilla which was removed during my lumpectomy. So the question, “Where to radiate?” was a reasonable one. He pushed his rolling chair away from the examination table and said that he was going to a Radiation Oncology National Conference that weekend and would consult with his colleagues. Meanwhile, he directed us to, “Go onto OncoLink and do some research. When you give me a call next week we can collaborate and see what each of us came up with.” Inside my head I was screaming, “OncoLink, a website, I don’t even have a computer.”  He advised us to go to the nearest Public Library. Thank God that the doctor’s back was to us, as my husband and I exchanged quite an impolite look.

After our initial anger, we realized that we had to become our own health quarterbacks; to take our health decision into our own hands, which took three full weeks.  We decided to phone or visit every doctor and medical center that we ever came in contact with and ask their opinion. The opinions varied greatly- from full breast radiation to a double mastectomy. Finally, we asked my medical oncologist and agreed with his decision to continue with four more rounds of a different chemotherapy and follow it up with six weeks of full breast radiation.

What we learned from this was three-fold. One, that you must take an active role in guiding and managing your health care. This is your life and you are the best one to manage your care. Otherwise, many medical mishaps could occur.

The second lesson is that once you make a decision, never look back. When you research, ask questions, weigh all the options, and then make an informed decision, embrace it and know that it is right.

The third lesson is, instead of being angry that no one has become your quarterback, realize that it is in your best interest to happily don that jersey. Instead of being a passive bystander, you are now an active participant in your healing. This fosters both your physical and mental healing. I am not unique when I say that when I was diagnosed, I was thrown into a tailspin, sensing that I was out of control. I was like a ship without a rudder, without a captain, in a sea of chaos. Once you become the quarterback or captain of your ship, you begin to feel more in control. You are now a part of the team where you transform from the passive angry patient into an active director whose actions and attitudes effectuate positive outcomes.

These lessons and the word captain reminds me of the famous scene in the movie DEAD POETS SOCIETY, starring Robin Williams, where he was a non-conformist English teacher in a New England boarding high school. He quotes Walt Whitman’s poem about Abraham Lincoln which begins, “O Captain! My Captain!” He emphasizes that words and ideas can change your world. I believe, like he, that you can change your world when you become the captain of your own ship. Williams finishes with, “Listen, you hear it… Carpe… Hear it… Carpe Diem… Seize the day boys. Make your lives extraordinary.”

Until next time, seize your life, because it is so EXTRAORDINARY! ✿