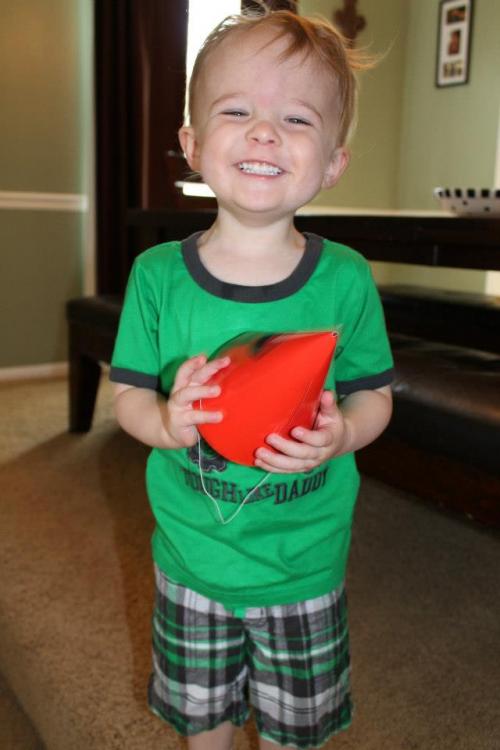 I was just five weeks pregnant when I was absentmindedly playing with the necklace my future husband had gotten me for our anniversary when I felt a grape-sized lump above my right collarbone.  Less than a week later I was going under to have the lump removed and biopsied; less than a week later we had confirmed our worst fears: cancer.

Before I was diagnosed, the thought of someone having cancer during pregnancy, much less undergoing chemotherapy had never even crossed my mind.  Being the evidence-based person that I am, I immediately dove into the literature and read every single research article related to a malignancy during pregnancy.  Waiting for the results of the MRI was torture.  How much had it spread?  What were the survival odds?  Would I be around to be a mother?  My thoughts consumed me.

I was diagnosed with Stage 2A Hodgkin’s lymphoma when I was just six weeks pregnant and I was terrified.  The primary site was the collection of lymph nodes under my right collarbone and it had spread behind my sternum.  I could not have been luckier to have the wonderful oncologist and the sensational nurses that I was referred to.  My oncologist was upfront and told me that he had never treated a patient that was pregnant before, but he laid out his treatment plan and goals and then gave me the name of the “lymphoma guru” in St. Louis for a second opinion.  I never made that appointment, because he just felt right.  I had faith in him, his team, and his plan.

So the plan was to wait until I had completed the first trimester of pregnancy and then begin 6 cycles (12 rounds) of ABVD chemotherapy.  In the mean time, I had the task of informing my family, friends, and colleagues of the news.  To be honest, not many truly knew how to react.  “Great news! We’re pregnant, but I also have cancer and have to have chemo and the studies are limited on the short term and long term effects on the baby.”  One of the hardest things for me was scaling back at work.  I was a labor and delivery nurse, mid-way through my Masters program and had just accepted a job teaching nursing students.  I knew I couldn’t continue at this pace.  I had to take care of myself to have the stamina to fight this battle.

During my research, I came across the Hope for Two…Pregnant with Cancer Network, and I was overjoyed.  Overjoyed is an understatement.  I felt such a sense of comfort and relief that there were other women out there, fighting their own battles, and best of all, they were survivors and their babies were alive and HEALTHY.  I was matched up with a survivor who I was able to talk with and ask those questions I was afraid to ask anyone else.  I could verbalize the thoughts in my head that I didn’t want anyone else to know I was thinking because she got it.  She had been through it and she understood.

My mind was constantly entertaining the “what if’s.”  But my future husband did a great job of pulling myself out of my own mind and saving me from myself.  He didn’t let me throw pity parties very often, and when he did, he knew just when to snap me back out of them.  While at the time, I would get crabby about it, he later told me it was because living a life without each other was not an option.  I can only imagine the fear and uncertainty that my family and close friends were faced with.

The day finally arrived for my first chemo treatment.  I had finagled my little one a bit more time chemo-free by waiting until after Thanksgiving.  By this time we knew we were having a boy and I had had a port placed in my left chest to administer the chemotherapy.  The once small nodes had morphed into a grape-like cluster beneath my collarbone.  I was accompanied by my mother and future mother-in-law.  It went relatively smooth with only some mild nausea and cramping during the administration of the last drug.  While I didn’t feel awful that night, I felt very hazy, which I later termed the “chemo fog.”  The next couple days I was off and on nauseated and just so foggy and tired.  I would curse my bladder every time I had to actually get up off the couch and go pee.

Each “chemo party” got a little longer each time.  I was able to have a private room where my “posse” would hang out, laugh, have lunch, and daydream of the sweet angel inside me.  My “private room” was really their storage closet filled with holiday decorations, but it was perfect.  The treatments got longer as the last drug would make me feel so foggy, sick, and would irritate my uterus making me contract, but it would always stop after a few hours.  My co-workers at the hospital created a meal train and would bring meals the night of and days following chemo.  Their love, support, and encouragement were some of the driving factors that kept me going.

We settled into a routine of blood draws to make sure my levels were high enough for treatment, chemo, feeling yucky for 4-5 days, having a good week, work, then repeat.  I began losing my hair after the second treatment and by the third it was coming out in clumps.  So we shaved it off.  Luckily, my head is relatively normal shaped and I can rock a scarf.  I’m not going to say being the bald pregnant girl was easy.  People like to stare, but my support always made me feel beautiful or helped me laugh at myself.

Meanwhile, my little growing boy was thriving.  He was growing and actually measuring big.  He was healthy and all of his scans were normal.  Anytime I was feeling down, all I had to do was look at his ultrasound pictures.  He was perfect.

As I entered my third trimester, I began having weekly fetal non-stress tests to make sure the baby was tolerating everything.  When I was 33 weeks, we went to the hospital for the testing.  The testing revealed that he was not tolerating his environment and it was time to meet our son.  I was reduced to the child who wanted nothing more than her mother by her side.

Beckett Anthony Schmuke was born at 9:21 pm via cesarean section weighing in at 5 pounds, 1 ounce.  He was taken to the Special Care Nursery to help with the transition to life outside the womb.  It was an incredibly intimate experience and brought us all closer together,

Several hours later, my dear friend and co-worker wheeled me to the nursery to meet my son.  He was perfect, 10 fingers, 10 toes, knobby knees and all.  He was already off oxygen and just needed a little help keeping warm and learning how to eat.  Two weeks later we were able to bring our bundle of joy home.  Our family felt right, complete.  We were home, together.

I still had two more treatments to go, despite me trying to convince the oncologist I did not need the last ones.  He disagreed.  I completed the last two treatments and I was done.  Chemo after delivery was different.  I had a whole new slew of side effects.  But when it was over, I was glad it was done.  I had my PET scan and it confirmed I was cancer-free.

A lot of people ask me how I did it.  Well, the way I saw it, I didn’t have a choice.  I had zero control over it.  All I knew was we needed to get done what needed to get done so life could go on.  So I could be a mother and we could be a family.  I wasn’t done with this world yet.  Plain and simple.  I had more people rooting for me and praying for us than I could count.  The whole experience was humbling.  We are not invincible, but we are amazingly strong.