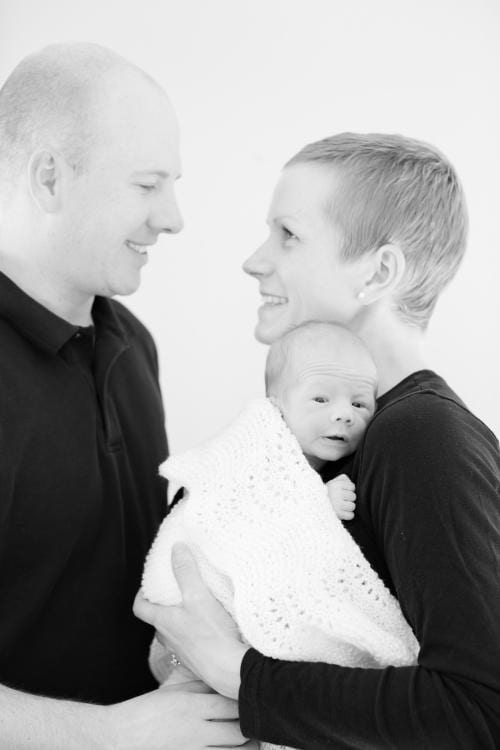 I competed in my first sprint triathlon “Tri for the Cure” in March 2013. I was competing for my aunt fighting lymphoma and other family members who had died of cancer.  Little did I know I would be competing with cancer myself.

In the week following the race, my husband and I learned we were pregnant with our first child.  Initial shock.  Four days after learning of my pregnancy, I was in the emergency room with severe right lower quadrant abdominal pain.  The doctors ruled out appendicitis, and then ectopic pregnancy.  On ultrasound, it was discovered that I had a 9cm cyst on my right ovary causing the pain.  My first thought was “get that thing out of there!”  The obstetrician on call offered minimally invasive surgery (laparoscopy) to drain the cyst, believing that it would then shrink on its own.  The other option was to wait it out.  My husband, Andy, and I decided to have the surgery, knowing the risks. I was only 5 weeks pregnant. I felt better immediately after surgery, and during follow-up with our obstetrician a week later, I was still pregnant.  I remember being unhappy about how we had to share our news with family so early in the pregnancy.

Over the next month, the pain returned in my right abdomen and gradually worsened. After seeing my obstetrician and having yet another ultrasound, we learned that my right ovarian cyst was 10cm large and I needed immediate surgery to remove the cyst and ovary, as there was potential for it to burst inside me.  I was so upset that I had to have another surgery requiring more time off work.  I had a laparotomy procedure that night and woke up with an incision similar to a C-section, and one less ovary.  I was 11 weeks pregnant. This baby had been through two surgeries, and was still developing normally. As standard procedure, the ovary and cyst tissue were sent to pathology.  Never in my wildest dreams did I think at age 28, I would receive a referral to oncology.  But there I was, a week later, sitting in the oncology office with Andy by my side, learning that I would require chemotherapy to treat my extremely rare form of ovarian cancer. My eyes blurred, and I remember asking my oncologist to begin writing things down, as I could no longer focus.  I had a grade II germ cell immature teratoma.  Staging was difficult to determine and I could not have further imaging or surgery to fully stage due to the pregnancy. The course of treatment typically recommended for this type of cancer is hysterectomy along with a chemotherapy regimen.  “Excuse me doctor, you do realize that I am pregnant, don’t you?”  She answered yes and proceeded with her recommendation that chemo be started soon, but that I should obtain a second opinion.  That we did, along with a third.  They all agreed that I would begin chemo when I was 15 weeks pregnant, well within the second trimester.  Most major organ development of the fetus occurs during the first trimester.  I was directed to the Hope for Two network through a family friend, who had chemotherapy during her pregnancy 7 years ago.  The first story I read was of two women who were diagnosed with nearly the same cancer as mine during their pregnancies.  I remember crying and realizing that I could do this, as several women had done before me.

Prior to beginning chemo, my medical team had been formed.  I had my obstetrician, my local oncologist, a nearby gynecological oncologist, and a perinatologist (maternal fetal medicine consult) on my team, not to mention, my incredibly supportive family and friends.  The gynecological oncologist had treated one other case similar to mine.  I felt as prepared as anyone in this situation could, knowing I had a lot to fight for.  I had chosen not to terminate my pregnancy, because I knew that somehow my unborn child had saved my life.  I was choosing life for the both of us.  And it helped that there was a registry of other woman who had been in my shoes with positive results.  Research and faith helped my husband and I decide to proceed with chemotherapy during my pregnancy.

My second trimester of pregnancy was blurred by side effects of chemotherapy.  You name it, I had it.  I remember the acid reflux being the worst side effect.  It doesn’t even compare to normal third trimester heartburn!  Every time a new drug was introduced to treat the side effects I was experiencing, we had to consult with my entire team to ensure that it would be safe for the baby. Many times, I had to consider the risk to benefit ratio.  I received 3 cycles of BEP (Bleomycin, Etoposide, and Cistplatin) for a total of 9 weeks.  My summer of 2013 was spent indoors, at the chemo lounge, or in bed napping.  I was blessed with so much support from my family and friends.  I was never alone in the chemo lounge. My husband and/or immediate family were always with me.  They made sure I ate as well as I could, ran to the pharmacy, did the grocery shopping, etc.  To this day, I do not completely understand how my son endured all that he did with me during that second trimester.  I put my faith in God, and prayed daily.  I know that prayer and modern medicine are to be thanked for my outcomes and the healthy delivery of my son.

I was scheduled for delivery at 39 weeks to avoid any late term complications. However, my son had another plan.  My water broke at 38 weeks and due to complications with the baby’s heart rate, a C-section was necessary.  Gavin Michael joined us with the most wonderful first cry.  I was most nervous about his health, but he was perfect.  He weighed 6 pounds and his name means little hawk of the battle.  He was a warrior and gave me so much to fight for.

A month later, I underwent my fourth abdominal surgery of the year for staging and biopsy to determine the stage of my cancer.  I considered it my last surgery to determine that I was in remission.  I had 2 small benign nodules within my abdomen that were removed and I received the news my family and I had prayed for: Remission.  An ending to the rollercoaster ride my family and I had been placed on in 2013.  My new and welcome challenge lies ahead, as a first time mom.  I look at my son now and say a quiet “Thank you God” for this precious gift.  Gavin is my miracle and I am his.